As we weren’t too sure about who was coming it took a while to get going, but first up, we decided to play our “Feature Game”, Parade.  This is a set collecting card game with an Alice in Wonderland theme.  Basically, there is a “parade” of characters in the form of a row of cards.  Players take it in turns to add a card from their hand to the parade and depending on the number and colour of the card they play, they then remove cards from the parade and place them in suits in front of them.  So, if a player places a red five, the five most recently played cards are “protected” and the player takes all the red cards and any cards numbered five or lower and places them in their area.  The aim of the game is to finish with the lowest accumulated total.  The clever part is the scoring:  if a player has the most cards of a given colour, all the cards score one regardless of the face value; all the remaining cards score their full value.  So, a set of high scoring cards can suddenly score a lot less because that player has the largest number of cards in that suit.  The other key part is that at the end of the game, each player adds two cards from their hand to their sets on the table.  Thus, the last two cards can have a dramatic effect on the game as they can change who has the majority in the colour suits and if you get it wrong  it can have a catastrophic effect on your end score.  Two players started off well, picking up only zeros and ones, while another was forced to pick up a few high cards straight away so decided to try to collect the most cards in these suits.  He was doing a good job when the everyone else was forced into taking a couple of high scoring cards each and started competing.  Despite initial appearances, the game was very tight, with the winner just one ahead of second with sixteen points, and slightly different card choices at the end could have completely changed the placings. 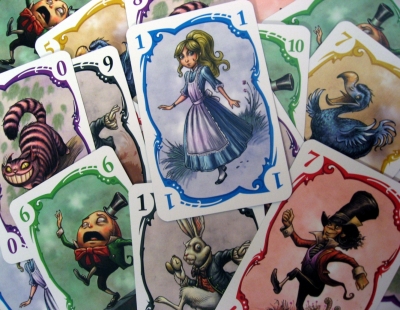 Next, we decided to play Agricola.  This is one of our more popular games and we had just finished setting up when one of the players was called away with boiler trouble.  We decided to leave it for another day and play Flash Point:  Fire Rescue instead.  This is a cooperative game where players take on the roles of fire-fighters trying to rescue people from a burning building.  Players take it in turns to carry out actions and then dice are rolled to spread the fire.  The addition of dice makes the game less predicatable than in some of the other cooperative games we’ve played where cards are used to simulate impending doom.  The use of dice also means that there isn’t the same “ticking clock” that there is with cards:  if you can stay on top of the fire, you can take as long as you like to get people out, on the other hand, if the fire gets out of control, it spreads faster and faster increasing the risk to the casualties and increasing the chance of explosions which cause damage to the building and suddenly the building collapses and everyone dies.

Since we had a player who was new to the game, we played Veteran level (three explosions, three hotspots and four hazardous materials) and used the reverse side of the base game board.  We divided our labour so we had half the team fighting the fire and the other half rescuing people.  There was a lot of fire in the centre of the board down the corridor, so Red went in first as the CAFS fire-fighter.  Meanwhile, Blue entered via the side door as the Rescue Specialist and quickly saved the first casualty before riding the ambulance round to the other side and following Red in to rescue a couple more.  Red dealt with the recurrent smoke in the shower cubicle while Blue enlarged the hole in a damaged wall and rescued a couple more.  One of the new Points of Interest was placed rather unfortunately next to fire and we didn’thave time to deal with them before an explosion meant we had our first victim of the flames.  Despite the loss, however, we had soon rescued the required seven people.  Somehow, leaving casualties in a burning house seems wrong, so we continued to try to rescue everyone else.  All the Points of Interest were now on the far side of the board, so the Rescue Specialist rode round the building in the ambulance and made a new more convenient entrance.  Red helped reveal which of the Points of Interest were real people and then together Blue and Red carried the last two people out leaving only one Point of Interest behind, which was known to be a false alarm.