After a bite to eat, we started late with our first game, Indigo and immediately in walked a two more gamers.  It is a quick game though, and Yellow in particular was quite fascinated watching.  It is a really beautiful and simple yet clever game, based on tile laying and path building.  The idea is players have to direct glass pebbles and catch them in their “gates”; different coloured stones are worth different numbers of points.  Each player has a single tile and on their turn, they place that tile anywhere on the board in almost any orientation.  If the tile extends the path of one of the stones or connects it to another bit of path, the stone is moved along the path to the new end.  If a stone arrives in a gate, the owners of the gate get to keep the stone; each stone have a value and the player with this highest total at the end wins.

In the four player game, players have three gates each, sharing one with each player, so there is a certain degree of team-work.  This was White’s first visit, and it became clear early on that this was not the best game for her as, without her glasses, working out where the blue ribbons go was challenging!  Nevertheless, she did remarkably well, especially in helping us make sure Green didn’t win!   Red and Blue led the charge and, when Red brought home the blue stone (which is worth a valuable three points), the writing was on the wall – a draw!

With a few more arrivals, we decided to play our “Feature Game” next, which was 6 Nimmt! (aka Category 5 amongst other things).  This is a much older game (celebrating its 20th anniversary this year), though is also quite simple to play.  There are four cards on the table forming the start of four rows and players start with ten cards in their hands.  Each card has a face value between one and one hundred and four and features a number of “Bulls Heads” (mostly just one, but some have as many as seven).  Basically, players secretly choose a card to play, and then simultaneously show them.  The lowest card is then placed after the highest card on the table that has a face value lower than the card they are playing.  In this way, four rows are formed.  The rows are full when they contain five cards and when the sixth card should be added, the active player instead takes all the cards in the row and places their card down to start a new row.  A player scores the number of Bulls Heads on the cards and winner is the one with the fewest at the end.  Since the number of cards in the rows increase (making it harder to play safely) and the number of cards in hand decrease on each turn (players don’t pick up after each turn), the decisions get increasingly agonising, especially when the number of Bulls Heads in the rows starts to increase. 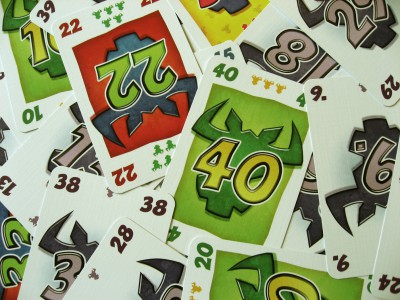 We checked that Red understood that she wasn’t supposed to be collecting cards and she assured us that she understood this aspect of the rules, however, it wasn’t a surprise when she finished with nearly twice as many Bulls Heads as anyone else!  So we decided to play a second round and work our way through the second half of the deck to give her a chance to improve things.  Green decided that it was time to “nobble” Blue as she had finished the first round with one Bulls Head, however, he had no idea how to go about doing it, nevertheless, everyone was delighted when Blue was the first to pick up.  Red seemed to have got the hang of it this time and managed to get through the whole round without picking up a single card which meant she finished in joint second with Green. 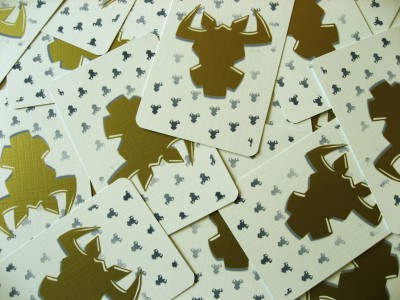 We didn’t have long before people had to leave,  so we played a game of one of our new favourite fillers, Dodekka, which has a lot in common with another game we like, Parade.  This is a simple little push-your-luck card game, with five different suits, Fire, Earth, Air, Water or Ether each with cards numbered 0-4. The game starts with three random cards placed in a line from the draw deck.  On a player’s turn they can either take a card from the deck and add it to the end of the row of cards, or take the card nearest the deck.  If the total of the face values of the cards in the row exceeds twelve, then the player has to take the whole row.  At the end of the game, players choose a scoring suit and add up the face value for that colour, then they subtract the penalty points – one for every card not in their scoring suit. 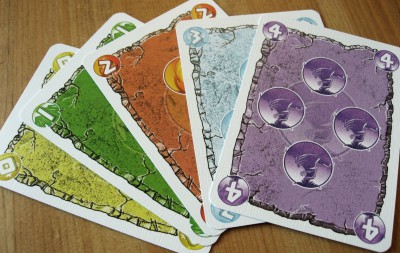 Yellow was the first to pick up a handful of cards, but it quickly became clear that he had a strategy and, as a substantial number of the cards were blue he was hoping to collect enough to offset any penalties.  Red, Green and Blue, meanwhile tried to delay picking up cards and then minimise the number they got so they could leave the decision until they were forced to choose.  Purple was forced to choose quite early on, but ran out the winner with a grand total of five, just one ahead of Green and three ahead of Yellow.  Remarkably, nearly everyone finished with a positive score, which we felt was much better than last time!

Next up was another recent favourite in Ivor the Engine.  We played this only a few weeks ago, but Yellow has won every game he’s played, so we all felt we couldn’t let this record stand…  Yellow started out well early on, with a lucrative job in Llangubbin, but it stayed close.  Purple carried out a lot of jobs at Mrs. Porty’s House and then picked up the matching event card to add more points.  Green collected a lot of sheep in the Grumbly Town area and then played a handful of cards to do several jobs one after another.  When an event card came up that moved everyone to Tewyn, we all payed a sheep except Yellow who followed the move with an ominous number of jobs in Tewyn Beach.  Meanwhile, Blue had picked up a lot of cards for Dinwiddy’s Gold mine, but without help was unable to clear the sheep efficiently.  So when the matching event card came and went, she changed her strategy and collected a couple of tasty looking jobs in Grumbly Town.  When it looked like Yellow was about to finish the game, Blue gave him a lost sheep card, immediately followed by Purple who forced him to lose a couple more sheep.  Blue turned her Goldmine cards into gold, then into coal enabling her to move and carryout a couple of jobs bringing her sheep flock to twenty-five, and as the last player in the round, brought the game to an abrupt end.  With her extra sheep event card, she finished with thirty, just ahead of Green who pushed Yellow into third, for the first time.

With only half an hour left, we decided to play what looked like a quick game in The Great Downhill Ski Game.  This is is an old game dating back to over forty years, but was ahead of its time.  Basically, players have a hand of ten tiles and on their turn they lay as many of them as they can to create a continuous path avoiding all the trees.  At the end of their turn they draw tiles from a face down pool to bring their hand back up to ten.  The game ends when one player makes it to the bottom of the run and players get points for finishing the course, but also for the tiles they lay, with points for corners and more points for sharper corners or crossing a track. 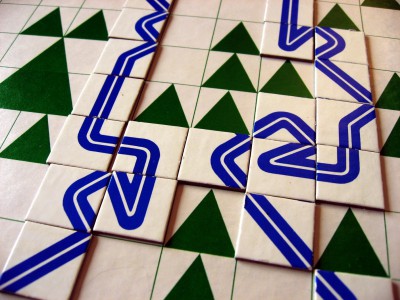 Yellow started followed by Blue and Purple, so by Green’s turn he was squeezed into a corner and had to wriggle between the edge and Yellow’s track, as well as avoid the trees.  Purple was lucky with the space she had as Blue had left her with a lot, but didn’t get the tiles she needed.  Meanwhile, Blue started well and made a run for the line, but trying to weave in as many of her higher scoring tiles as she could.  It looked like Blue was miles ahead, but Yellow crossed the line first, leaving everyone one turn to finish.  Purple was the only one who couldn’t quite make it, though she managed to use nearly all her tiles.  Blue was hampered by drawing a high scoring, but high penalty tile in the penultimate round that she couldn’t get rid of, and came joint second with Green who did remarkably well considering his difficult start.  The gold medal went to Yellow though, who was not only first down the course, but was also left with the fewest penalties at the end. 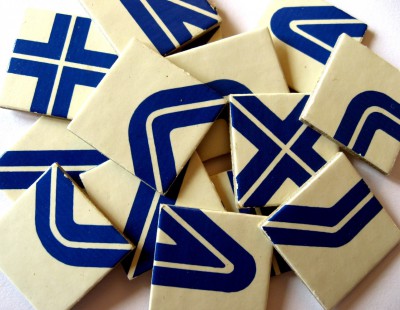