The next meeting is on Tuesday 22nd January playing shorter games from 7.30pm as people arrive, until 8pm when we will start something a little longer.

The “Feature Game” will be Tutto, which is a quick press your luck game with dice rolling and cards.  We chose this as we would like to play something a little more substantial that would depend heavily on the number of players that come along (possible games include, Vasco da Gama, Village, Niagara, Mystery of the Abbey and Snowdonia). 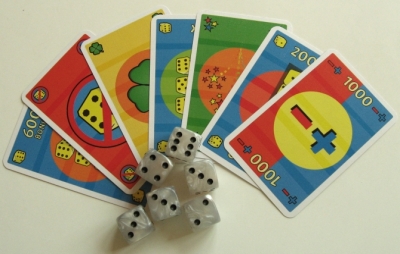 And talking of dice…

The invigilator told the students they could start and Joe opened the paper and started throwing the dice to select his answers. The invigilator gave Joe a long look, but he could see nothing in the rules to forbid it:  it is not uncommon for students to try their luck and, he supposed, this was an extreme example.

Very soon Joe had finished his paper and put his head on his arms on the desk and fell asleep.

About half an hour before the end of the exam, Joe sat up suddenly, and started throwing his dice again. This time the invigilator was unable suppress his curiosity, and approached the Joe.

“Why are you rolling  the dice again – you finished the questions in the first few minutes!” he said.

Joe replied, “Well sir, you always say we have to double check our answers…”