The first challenge of the evening was to set up a track for our “Feature Game”, the gorgeous, dexterity car-racing game, PitchCar.  We started with getting pieces out of the box, then we decided the table needed to be expanded, then we struggled to make the ends of the track meet!  After a bit of pantomime, we eventually resorted to one of the suggested tracks, including chicanes and the bridge/tunnel from the first expansion.

Once the track is set up, the game itself is very straight-forward, with players taking it in turns to flick their little wooden “cars”, and the winner the first to complete (in our case) two laps of the track.  The rules are simple: a flick must be a flick (not a push), and cars must end their turn the right way up on the track.  Leaving the track is allowed, but cars must not fly more than two track sections or touch the table.  The leading player always plays first in each round.  Anyone who violates the rules forfeits stroke and distance, but any consequential moves to cars that stay on the track are valid.

Blue missed out on the practice lap as she was preparing food, so started from the back of the grid.  Black got off to a flying start and led round the first couple of corners before the rest of the pack caught up. Blue and Pink had caught up by the bridge, but Black held them off through the chicanes before they finally passed going into the bridge.  It was short-lived however, with Black retaking the lead before Pink passed and took a commanding lead going into the second lap with a disputed two wheels off the track.  Even with an eventually agreed penalty of a missed turn, his position turned out to be unbeatable.  Meanwhile, Blue and Black tussled before Blue got stuck on the bridge on her second pass and Black romped away, finishing second.  That left Blue and Purple to fight it out for the honour of the wooden spoon.  This was a competition they both seemed determined to win, with a series of miss-flicks, and over-flicks, but Blue eventually made it across the line first, with a cloud of smoke.

While tea was cooking, we played a couple of quick games of Belisha. This is a Rummy-based game with cards that depict a trip from London to Oban.  The game was a Christmas present and appears to be an original 1937 edition which probably makes it the oldest game we’ve played.  The cards run one to thirteen in four colour suits, but each card also has a road sign.  Like Rummy, players first draw a card from the face down draw deck or the face up discard pile.  They then play any runs or melds they want, with the difference being that the melds can be in numbers or road signs.  Turns end when the active player discards a card.   The game itself is fairly straight forward, though we still managed to play it wrong!  When laying runs of cards, we were playing any cards in sequence, whereas they are (of course) supposed to be the same colour/suit.  With this game it is usual to play several rounds and the game ends when a player to reaches a pre-agreed total, however, as we were only filling time, we just played a couple of hands with honours going to Black and Pink. 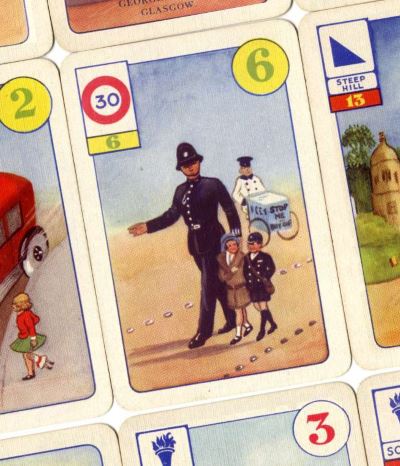 After we’d eaten, we decided to play CO2.  This was the Feature Game two weeks ago, but we didn’t get round to playing it.  As only two people had played it before (and that was a long time ago), we spent quite a long time reminding ourselves of the rules, to say nothing of punching out all the pieces!  The game itself is quite an unusual one as it is cooperative, but also competitive.  The idea is that players have to cooperate to save the planet, but the player who is the most successful wins.  Alternatively, if players don’t cooperate, then the greenhouse effect will overpower the planet and everybody loses.

Each player is the CEO of an energy company responding to government requests for new, environmentally friendly power plants.  There are three stages to building a power plant:  proposing a project; installing the infrastructure for a project, and building the power plant.  Proposing a plant is rewarded by the local government grants (money, technical resource cubes or scientific sponsorship).  On the other hand, installing infrastructure has an environmental cost:  at the start of the game, each region starts with a certain number of Carbon Emissions Permits (CEPs, granted by the United Nations).  These CEPs are spent whenever the region needs to install the energy infrastructure for a project. Building a power plant earns victory points, but also has a cost associated with it which is paid in money and technical resource cubes.  This cost varies depending on the nature of the plant and also changes throughout the game.

The game is played over five decades and each decade comprises three rounds.  In these three rounds, the players need to try to satisfy the energy demand of the different continents.  At the beginning of each new decade, the energy demand of each region is evaluated and if they don’t have enough power plants, they have to build a fossil fuel plant to supply the deficit.  These are drawn at random from a pile and correspond to gas, coal and oil.  Each of these cost the region one CEP, but more importantly, they contribute to the burden of CO2 in the environment.  When the level of CO2 reaches 350 ppm, the world starts to suffer environmental disasters and at 500 ppm, the game is over and everyone loses.

At the beginning of each decade, money is awarded to each company based on their scientific expertise.  Each company starts with a scientist, though they can get more if they choose when proposing a new project.  The CEO of the company can assign their scientists to project, which earns them expertise in one of the associated scientific technologies each turn.  When a power plant is built, if there is a scientist working on the project they get the opportunity to do what scientists like to do best: travel to a conference to present their work.  When the conference has its full compliment of scientists, more expertise is awarded and they all return to the company.  Thus, through the scientists, the companies gain wealth which can be used for building power plants, however, they also need a given level of scientific expertise in each technology before they can build power plants of that type.

The game is quite fiddly and there are a lot of things to consider.  For example, a player may propose a solar power station or install its infrastructure, but they cannot build one unless they have sufficient scientific expertise.  Similarly, the location of solar power plants is also restricted to certain continents, so a solar project can only be proposed in certain regions.  The player who builds the most different power plants in a region gains control of that region and (more importantly) its CEPs.  CEPs are used when building the infrastructure to build a power plant, but are also worth points at the end of the game.  CEPs can be bought and sold on a market, and their price fluctuates throughout the game, with the final value affecting the number of victory points they are worth.  Points are also awarded to players who successfully complete their company’s personal goal (which is depicted on cards handed out at the start), or for achieving goals set out by the UN (which are cards laid out near the board and are available to players throughout the game).

We were very, very lucky with the set up.  Each region gets one fossil fuel power plant drawn at random and the total CO2 sets the initial CO2 level in the environment.  In our case, we had a lot of gas-fired power stations which are relatively environmentally friendly, so we started off well.  Purple started building in Oceania and Black in North America.  Meanwhile Blue started building up her expertise in solar and Pink just looked puzzled. Although were were unable to satisfy the worlds power demands, for the first couple of decades, we continued to be lucky and avoid the most highly polluting fossil fuel plants, which gave us a chance to start to get a feel for the game.

After a brief break to admire everyone else’s fireworks and sharing a bottle of dodgy rosé champagne, we continued playing.  Pink was now somehow in the lead, despite having to be woken up for his turn each round.  Blue suddenly realised that she’d proposed a couple of nuclear fusion projects that weren’t allowed in those regions, but everyone just shrugged and carried on with Black commenting that it “was that sort of game”.  Eventually, the CO2 level reached critical and disaster struck North America.  As Blue was the only player without a power plant in the region, she had to pay the price (a valuable technical resource cube).

It was then that Black claimed a UN goal card, to choruses of, “Oooo!  What did you do there?  What does that do!?!?” as Black surged along the score track taking the lead.  Inevitably, everyone suddenly looked to see what power plants they had built and tried to match them to the cards that had been sat quietly beside the board for the whole game, totally ignored.  Then there was a flurry of people claiming them as the game came to an end.  It was only then that Pink noticed how many CEPs Blue had amassed – with her company goal card giving her extra points for each CEP she had in hand.  Black’s company goal on the other hand, gave him points for achieving UN goal cards, which explained how he knew what they did and had paid so more attention to them than anyone else.  As the people reading the rules, Black and Blue had a better grasp of the game and it was not surprising that they finished fighting it out for the lead, but in the end it was Blue who took the first win of 2015, albeit having mess-up in the middle.

Learning Outcome:  Late at night is not the best time to learn to play long and complicated games…